Improving the area’s broadband, especially in many of the scattered townships of Assynt, has long been recognised as a need in Assynt. There is now relatively high speed fibre-optic broadband available from the main telephone exchange in Lochinver, however some areas in Assynt have some of the worst broadband speeds in the UK.  The speed also is affected by increased usage during the tourist season, with speeds being much lower in the tourist season.

With a decent internet connection being so important for work, including self-employment and other enterprise based at home, and for general life,  very poor broadband is a serious hardship and disadvantage for many local residents.

In 2015 a Community Broadband Survey was carried out, organised by Willie Jack on behalf of what was then the Assynt Community Association, with funding from Community Broadband Scotland and Highlands & Islands Enterprise.  The report of this survey can be dowloaded here:  Assynt CBS report january 2016.

Since then, Assynt Development Trust have had discussions with Highland Wireless, and Assynt Crofters’ Trust, planning towards provision of wireless broadband provision in Assynt, in a number of geographical phases.  Phase 1 is expected to bring wireless broadband to the north of Assynt, covering the Stoer Peninsula.

A public meeting about this project was held at Stoer Village Hall, on Thursday 11th July 2019, attended by nearly 40 people from the local area. 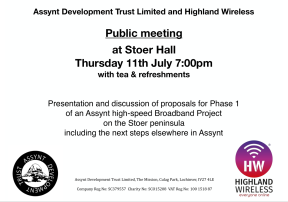 Phase 1 is hoped to be completed over the coming 3 months, with phase 2 following soon afterwards.

Phase 2 will include Drumbeg, and probably Achmelvich, with Phase 3 expected to include the area south of Lochinver, including Inverkirkaig. 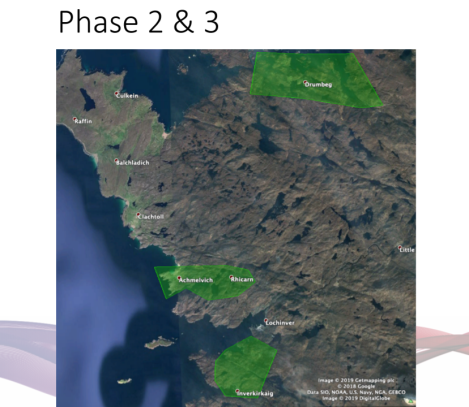 There is also potential for Kylesku and other areas in the east of Assynt to get coverage, via a signal beamed from just north of Kylesku.