As part of the Scottish Government’s Big Climate Conversation, seeking views from the public on proposals for reducing carbon emissions and otherwise combatting climate change, a Climate Conversation event was held in Lochinver Village Hall on the evening of 26th October 2019.  Over 20 people attended, mostly walking or sharing lifts, some even cycling on a dark cold night to attend without being part of the problem of carbon emissions.  Some others contributed by email.  There was much well informed discussion and debate. 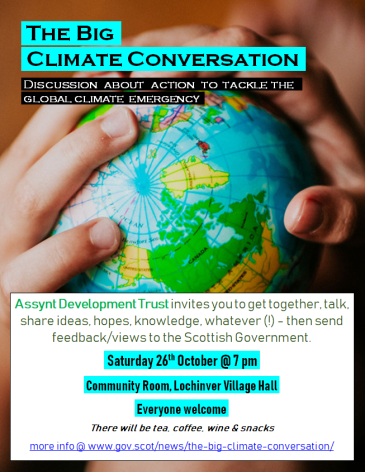 The report of this event can be viewed and downloaded below.  The document follows the format of the Scottish Government’s feedback form, but also includes minutes of the meeting at the end of the document.

Please get in touch if you have ideas for future local climate action or continuing conversation in which you think ADT could or should be involved.

Those present were keen to see things develop beyond this event.  Ideas were suggested, including, for example, Assynt emulating a move made in Ullapool asking for all local organisations and businesses to include combating climate change in what they do in a meaningful way, such as reducing their carbon footprint.